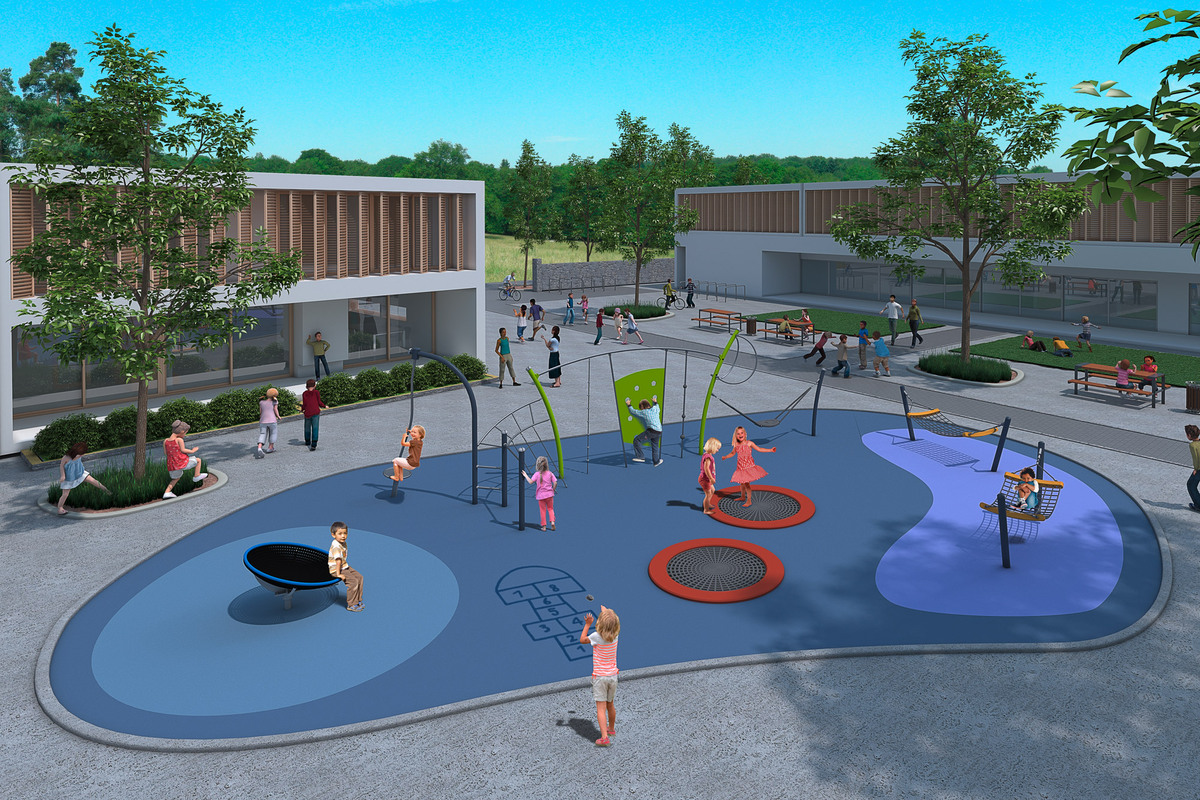 When memories of the school playground come to mind, many think of grey concrete deserts with dilapidated seating – more reminiscent of prison than recreation. This kind of playground design is a remnant of a time when the break was only meant to serve as an interruption to the draining lessons. Until the 1980s, legal standards in many places demanded paved surfaces in school playgrounds, and asphalt and paving were diligently applied. It was not until the 1970s and 1980s that a change in thinking began, and a new type of playground design was developed accordingly. It had to be meaningful and creative and serve as a space for play, experience and adventure – not just as a place to take a breath of fresh air. Nowadays, a school playground has to be attractive and, above all, it has to be a place where you can move around, distract yourself from the daily routine of the classroom and create a sense of balance: The idea of the playground as an educational space was born, or more precisely: education through movement.

Why a playground that promotes physical activity is so important

Lack of physical activity among children and young people is a serious problem these days. More than ever, they spend a large part of their time sitting in classrooms. But changes outside of school, such as digitalisation, are also increasing the problem. Smartphones, tablets and computers tie children down, stealing time away from active play. Apart from that, walking long distances is now a relic of the past. Instead, bus, train or chauffeur mum or dad are the norm. Consequently, schoolchildren are heavier and more uncoordinated than their parents were at the same age. Such a development is particularly worrying in terms of health: diseases such as diabetes or high blood pressure become a problem at a young age. In addition, a sedentary lifestyle and constant gazing at screens encourage poor posture. The bottom line is that the time available for school sport is limited and, in terms of the whole week, far too short to really do anything about it.

How can a creatively designed playground help?

On the one hand, schoolyard design should encourage movement. This is not only about compensating for sitting but also about teaching an active lifestyle, ideally beyond the school day. With a creative, inviting design and sensibly planned playgrounds, the aim is to awaken children’s desire for movement so that they also enjoy seeking exercise outside of school. Furthermore, the children’s cognitive development is promoted. It has been proven that cognitive and physical development occur simultaneously and are closely linked. A child who moves a lot is more concentrated and also achieves better grades. The type of movement is crucial: those who only lift weights will not benefit mentally. In contrast, children who master challenges through play, who have to assess their own motor skills and who can express themselves creatively in free play, train their minds at the same time. In addition, dexterity, endurance, balance and motor skills improve as if by magic.

Attractiveness is the keyword for a creative playground design. Asphalt and concrete have had their day; instead, the school grounds should be inviting, and “school” should be a place to which pupils like to return. From a scientific point of view, there are – according to the theory of the “7 C’s” of the Consortium for Health, Intervention, Learning and Development (CHILD) – 7 criteria that make up an ideal space for moving and playing for (young) children in general. However, these can be applied just as well to playgrounds – taking into account the needs of children and young people.

The first criterion revolves around the aesthetic design of the schools playground. The chosen playground style is not nearly as crucial as proportions and symmetries. “Order” makes people feel safe, whereas a playground that is too complex and cluttered looks unaesthetic.

Especially on school grounds, it is essential to keep an overview. Whereas a lot of large playground equipment makes it impossible for supervisors to keep an eye on the children, a few pieces of playground equipment that are specifically used and placed are more suitable. Likewise, inadequate planning has been made when equipment becomes obstacles on pathways.

Here it is “The path is the true destination”. Connecting paths between play areas should not only be a means to the end but should invite people to use them.

A playground needs several areas to satisfy all the needs of children and young people. The most significant part of the playground should be used for playing, moving and letting off steam. But there should also be places for rest and retreat, as well as meeting places for communicative exchange. Areas, where children can experience nature and experiment with natural materials are also recommended.

A playground that looks great but offers no challenges is useless. Depending on the age group, there should be playground equipment that gives children and young people the opportunity to test their own abilities. It is also a way to learn risk-taking skills.

Whether in the sandbox or in the school playground, children like to change space according to their own ideas. As a result, it is good if this is made possible in the schoolyard.

The design of the playground should also take into account the surrounding environment. A fenced-off schoolyard is less attractive than one that creates connections to the “outside”. This is especially useful for playgrounds that may also be used by the public.